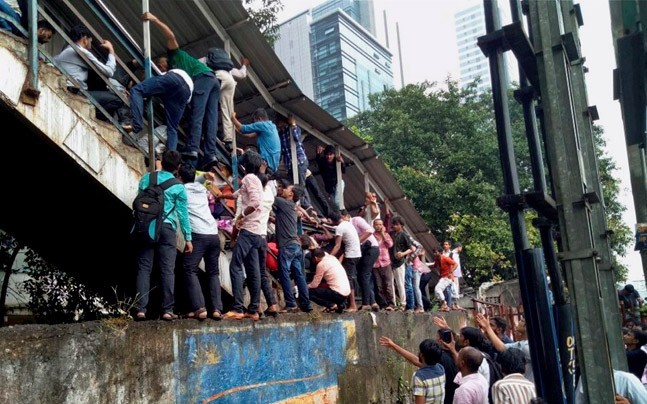 The stampede at Elphinstone Road railway station in Mumbai turned a daily routine for hundreds of commuters into a nightmare. The bridge, which connects Elphinstone and Parel stations, is usually crowded during rush hours but it was more so on Friday morning after people huddled to take cover from a sudden downpour. The stampede took place around 10:30am, when hundreds of people are on it at a time on most days. At least 22 people were killed and 39 others were injured on Friday, 29 September. 2017

The disaster was a stunning reminder of the poor safety conditions on India’s railways and the frequency of crowd-related accidents, even in rapidly modernizing metropolises like Mumbai.

What to do now?
In India, stampedes are common where heavy crowds cause panic and the situation turns deadly. Such cases mostly occur in religious gatherings and in festival seasons. However, little steps of prevention can save hundreds of lives. Any of us who have travelled in trains might have thought “That could have been me!”. While we invite your ideas and suggestions that can be immediately done to prevent the occurring of similar stampede, listed below are few strategies that could be adopted:
Follow Crowd Management Strategies
• Use of barriers
• Display of warning sign boards
• Announcements using loud speakers in heavily crowded places
• Use of dedicated facilities such as sidewalks for passengers entering and exiting stations
• Creation of concourse areas where people can meet, congregate or wait during rain or other natural calamities

Implement Administrative Measures
• Collect data on the expected crowd
• Make governance more citizen-centric for improving amenities and social welfare
• Establish effective coordination between various agencies
• Use real-time monitoring mechanism, simulation tools by using past data and studying the behavioural pattern
• Effective use of ICT to alert the authorities about such crowd
• Design a mechanism through which official data on all incidents can be made available in the respective websites of the State Governments. Such mechanism will help in compiling and recording the disaster data for future use
The following stations may also become alert based on the above said recommendations:
• Chhatrapati Shivaji Terminus, Mumbai
• Hazrat Nizamuddin Railway Station, New Delhi
• Secunderabad Junction, Hyderabad
• Howrah Junction, Kolkata
• Lucknow Railway Station, Lucknow

« Migration to GST – A classic example of change management

One response to “Elphinstone Station Stampede – A Needless Disaster”